Skip to content
Over the last couple of evenings, when I finally could get outside when a) it wasn't cloudy, b) the moon wasn't in the sky and most importantly c) when one of my next door neighbours hadn't left their outside light on, I managed to take achieve my "task". I was wondering if it was possibly to use a standard camera (on a tripod) to get an image of one of the more popular open globular clusters M44 in the constellation Cancer. The answer it appears, is yes. To the unaided eye, it's very hard to spot Cancer since most of its stars are brighter that magnitude 3.5 and under light polluted skies, that's hard to see. Sure with binoculars it's pretty straight forward, so to start things off I took a large field image (which I've labelled). Castor and Pollux of Gemini are on the right, The entire constellation of Cancer is in the centre and the head of Hydra can be seen below. I've highlighted M44 in the square, all this with a 13 second exposure. M44 can clearly seen. By the way, it looks far more impressive through a decent set of binoculars or spotting scope 🙂
As a further experiment, zoomed up as far as I could go (optically) on camera and took another image, this time to see if it was possible to see M67. It's a far harder target, and to be fair, it's only *just* about possible to make it out with the spotting scope so I didn't hold out much hope. Some may say I'm seeing things, but I'm fairly sure that in the second image (also highlighted), it's possible to make out something (also highlighted). Long shot I know, but further encouragement to press on! 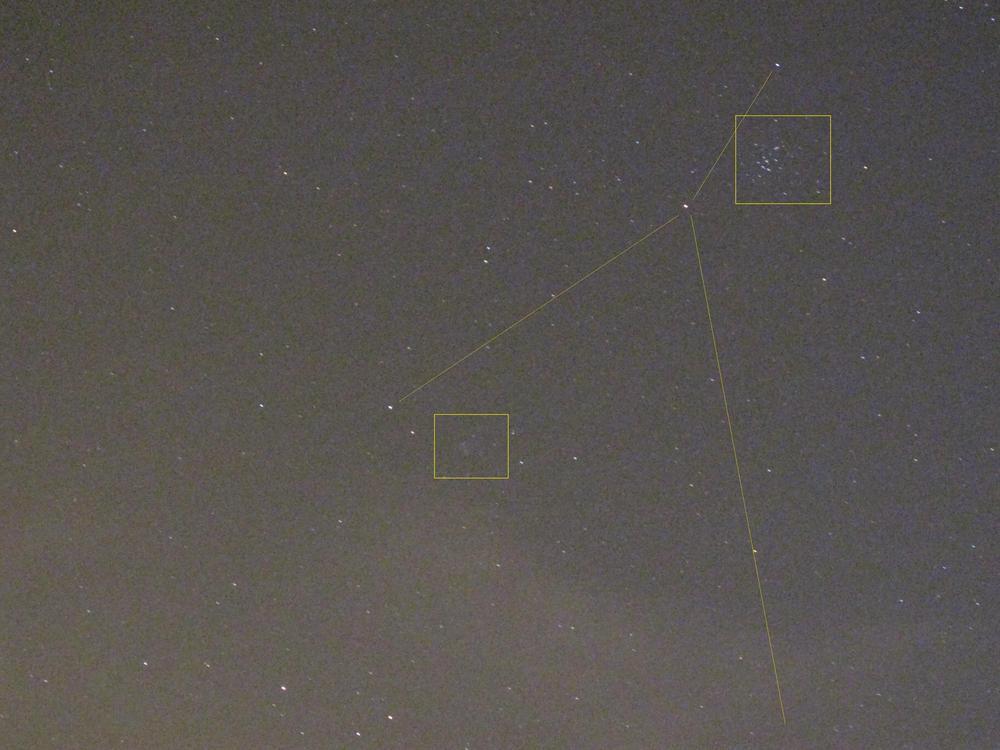