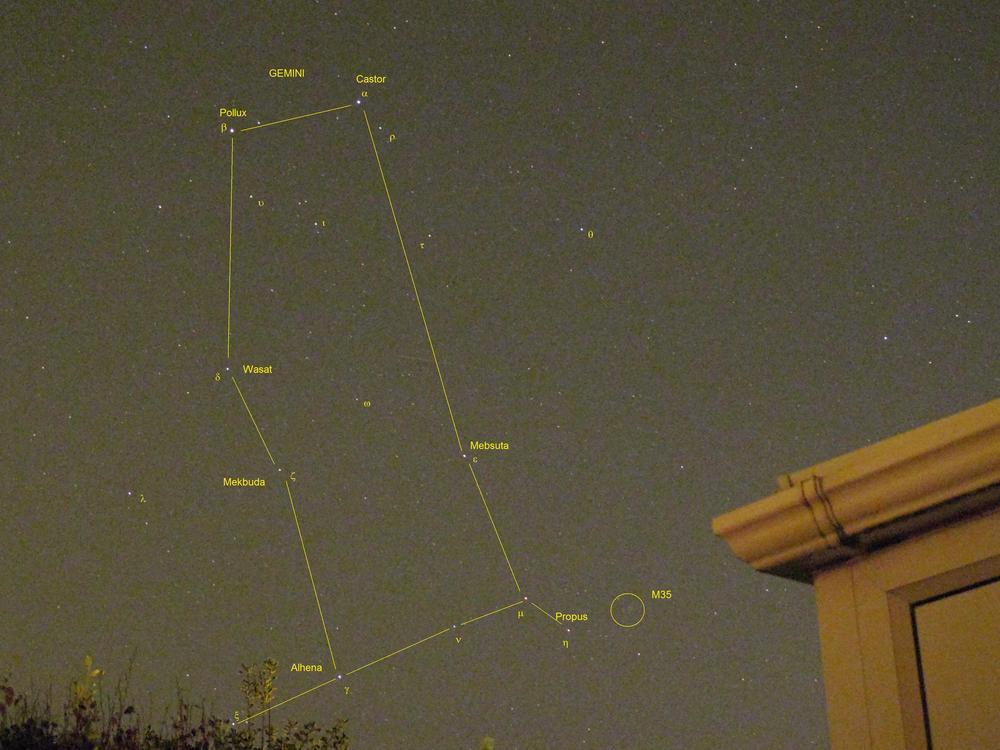 At this early stage, I'm still just feeling my way around. Given the degree of light pollution both generically from the town, and locally neighbours, the best view can only really be deduced once outside. I had planned some further investigation of stars in Leo last night, but too much residual light from the town made efforts futile. Instead, my view out towards the NW (out over the sea) was quite dark, and given the neighbours outside light was off, gave the best options. So instead, I tried some constellation mapping (wide field) of Gemini.
I soon noticed, that even though this direction offered the best view, the lowest magnitude visible was still fairly high (to the naked eye). It's only when you take an image (this one is 10 seconds), that some of the fainter stars become visible. I've labelled all the major stars in the constellation, but was surprised to notice, that even on this wide view, it's *just* possible to make out M35. To be fair, I couldn't really see much in the spotting 'scope either, but it must be remembered that it was fairly close to the horizon.
I'm genuinely surprised what can be caught on a fairy standard point and shoot camera, granted the G11 wasn't cheap, but with an ISO3200 setting and 10 second exposures, I seem to picking up a lot more detail than I expected. The maximum exposure I can have is 15 seconds, but I find that light pollution often is too great for that length of exposure, and in addition, the stars "trail" a lot more. Still, I do recall reading somewhere it's possible to get software to remove trails, so may take a look for that at some point.
My views are very restricted, anything looking from N through E and up to S is useless unless it's *very* high in the sky. All due to the street lamps on my road. Anything S through to W is a no go up to about 30 degrees high (light pollution from the town). Anything W to N is best, that is of course unless next door neighbours outside light isn't on. Must have a word about that one day, but they have only just moved in and I don't want to rock any boats yet 🙂
And so ladies and gentlemen, I present, Gemini….

Although targeted towards YAC, the resources are free and can be used by anyone. Watch the film then use the resources mentioned in the videos available at https://sharedpast.org/projects/yac-my-place-in-time/

@thetimeteam is back on an even bigger scale as
we head to @BroughtonCastle in Oxfordshire with @CotswoldArch & @Detectorists_ to investigate a Roman Villa!